Here's where you will find fan fiction written by me, Shannon (aka KittyShan).
Hope you enjoy and if you'd like to send C&Cs, please email me at:
lances_kitten@yahoo.com
Meet the Author
Want to get to know KS a little better?
Click here to meet KS!
Authors, artists and webmistress have all taken the time to carefully rate all works.
This was done for visitors just like you!
We want you to know that we respect your right to choose what you read and view.
In return we hope that you will respect our artistic license and

take all ratings and warnings under consideration.

G: Pretty tame - anyone can view.
PG: mild language, innuendo.
PG-13: strong language, innuendo, mild violence, sensuality.
M: Everything in "PG-13" plus graphic violence - we're talkin' a la HBO here.
R: Everything in "M" plus sexual situations - aka a Lemon.
In addition to the works in this section,
you can find more from (Kitty)Shan over at
Hunk's Corner
Unless otherwise noted, the following fics are completed.
.

Kiss of the Winter Fairy

A Lovely Day for a Picnic

~*~
Final Victory
by Shannon
Originally Published 12/23/2016
Rated M (Mature Content) - Adult Language. Adult Situations. Sexual Situations.
Number of Chapters: 5
Written for the KAEx Secret Santa Gift Exchange 2016
Voltron: Defender of the Universe; Lion Voltron; Keith/Allura
The war against Doom has been won, but the real battle is just beginning when a coup at the Galaxy Garrison forces the Space Explorers back to Earth. How will the team cope...and will Keith and Allura ever get their chance at love?


Back to the Top
~*~
Kiss of the Winter Fairy
by Shannon
Originally Published 12/14/2014
Rated PG-13 - Innuendo, Sensuality
Number of Chapters: 7
Written for the KAEx (November 2014) challenge, "Light's Out in the Cold"
Voltron: Defender of the Universe; Lion Voltron; Keith/Allura
An ages old Arussian tradition. A beautiful night interrupted by a terrible snow storm. An over-confident Captain playing a dangerous game of cat and mouse with a fairytale Princess determined to have her way...Will circumstances lead to romance or heartache?


Back to the Top
~*~
Another Spring-time Tale
by Shannon
Originally Published 2002 ~ Revised 2014
Rated PG - Mild Language, Innuendo
Number of Chapters: 1
Voltron: Defender of the Universe; Lion Voltron; Keith/Allura
When the Voltron Force decides to do something kind, someone special takes notice! 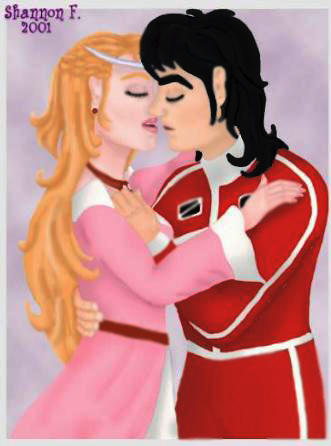 Keith and Allura by Shannon
The following fanfics are part of my
"Just Allura"
multi-part story arc.

The following is a list of the "Just Allura" series (there are more fics that I'm working on/haven't been written but are outlined and/or are not yet named) - from "Mistakes and Misunderstandings" down, the fics are complete but awaiting a revision before I post them here.

Currently, I am working on the revision of "Mistakes and Misunderstandings"

Be Mine
by Shannon
Originally Published 02/23/2015
​Rated PG-13 - Mild Language, Innuendo, Sensuality
Number of Chapters: 7
Voltron: Defender of the Universe; Lion Voltron; Keith/Allura and Lotor/Allura
It's Valentine's Day and the Prince of Doom takes a special gift to the Princess of Arus, hoping to win her heart. When the two royals end up trapped together in a cave, will there be a spark between them...Or does Allura's heart truly belong to the dashing Captain Keith, Commander of the Voltron Force?
Back to the Top
Fan Works
About the Author
Mini Bio: KittyShan is... feeling uncharacteristically shy at the moment! ;) Okay, KS loves to read and write, to paint and draw - anything creative and crafty in general. She loves cooking and home-cooked meals - especially for family and friends - you know those big family get-togethers where you hang out in the kitchen with a glass of wine and just enjoy life? Yeah, she really loves those days! :)

KittyShannon spends most of her free time working on her creative projects - everything from her writing to her artwork. But she also enjoys playing video games and watching old movies. She loves music of all kinds, but has a special affinity for classical pieces - and she *adores* the 2Cellos (which is her favorite thing to listen to while creating). She likes rainy days, and bubble baths, finds birds to be fascinating and beautiful creatures and has an interesting collection of art that seems to center on peacocks. Oh! And she has a massive collection of frogs - stuffed animals/plushies, figurines, candy dispensers, molded candles and soaps... No, KS does not think frogs are cute, nor are they her favorite animal...a long time ago, one of her sons gave her a plush froggie and it never stopped.

KS tends to be quiet and reserved until she gets to know you - once she's comfortable enough to open up to you, well...then you'll wish KS was quiet and reserved. ;) She loves to laugh and play, and is a bit of a prankster - and more than once in her life she's been called a goofball. The flip side to that is she can also be a rather deep and philosophical person, who is very sensitive and wears her heart on her sleeve. I guess you could say KS is a bit eccentric with rather eclectic tastes and interests. She tends to follow her own path and do her own thing, and has never felt a need to "fit in" nor to change herself to please anyone else.

To close, I'll leave you with some of my favorite quotes.

"None of you will have real Faith until you wish for your brother what you want for yourself." ~ Mohammed

"When people show you who they are, believe them the first time." ~ Maya Angelou

"Holding on to anger is like grasping a hot coal with the intent of throwing it at someone else; you are the one who gets burned." ~ Buddha

"It's okay to be myself. I don't have to please everybody." ~ Unknown

"In a world where you can be anything, be yourself." ~ Etta Turner
Here's what KC has to say...

Shannon discovered her love for writing very early in life and we are lucky to read her Voltron fics, with her series Just Allura that I discovered fifteen years ago. It includes a delicious menu for her fans: sweet and tender with A Christmas Tale, funny and witty with A Lovely Day for a Picnic, heart wrenching with Shattered and Full Circle, and bittersweet with Be Mine.

Be Mine is special because it has a Prince Lotor making the ultimate sacrifice, letting go of Allura so she can be with Keith. That's something that I like about Shannon, giving the villain a chance to redeem himself, to be happy at least for a few precious moments.

One aspect of Shannon that I find endearing is her love for the rebel of the Voltron Force, the one who isn't afraid of speaking his mind or following his instinct, who is a softy below that tough exterior, who has a wonderful sense of humor and obviously enjoys the princess' kisses after saving the day… our dear Lance.

She has done a great job of developing Lance and showing his considerate side while still showing enough of his appealing bad-boy attitude to keep him still Lance. And I can't forget the payback he endured for trying to "speed up" things between Keith and Allura. (A Lovely Day for a Picnic)

She has a wonderful ability of making these characters come to life. Maybe we are not able to "see" inside their heads in the original series, but with Shannon's writing we get a good sense of them through the dialog, the actions and observations of others.

Shannon is always willing to offer writing advice and ideas. All her stories bring you a smile and a sigh at the ending… and the urge to read again!

~ KittyCaro
Here's what KL has to say...

I first met KittyShannon in the late 1990's by way of her wonderful Voltron fan site The Lion's Keep and her entrancing fanfiction, 'Just Allura'. I was a newbie to the internet, and couldn't believe my good fortune in finding such beautiful love story about one of my favorite animated series. Filled with admiration (and a bit of shy trepidation about contacting a total stranger to express this) I emailed Shan to tell her what a joy it was to read her story and visit her website, and that her story inspired me to try writing my own.

Her prompt reply was warm and gracious, funny and modest. We began to correspond, chatting about Voltron, and writing....I was delighted to find her thoughts on characterization, her attention to researching and detail, her humor, and honest reactions to whatever we talked about were as original, intelligent and wonderful as her stories.

And so it was that a simple email exchange with an author I really liked has led to an unbreakable, deeply treasured friendship 17 years later, a friendship that has been one of the great blessings in my life. She's become like a sister to me (a much younger sister, may I add. lol)

And as the years have passed, my admiration for KS as a person and writer continues to grow. There is no more loyal and true, unselfish and giving person than Shan. She continues to evolve and grow as a writer, putting her loving heart and courageous soul into every word. Her stories have a depth of characterization that makes the characters come alive. Her plots are engaging and romantic, with strong, riveting conflict to hold a reader's interest. She will make you think as you gasp, laugh or tear up. In short, KittyShannon is the reason I read (and write) fan fiction. :D

~ KittyLynne
Back to the Top