Here you will find fan fiction written by my darling friend, Lynne (aka KittyLynne).
Hope you enjoy and if you'd like to send C&Cs, please email Lynne at:
lynnescribe@gmail.com
Meet the Author
Want to get to know KL a little better?
Click here to meet KL!
Authors, artists and webmistress have all taken the time to carefully rate all works.
This was done for visitors just like you!
We want you to know that we respect your right to choose what you read and view.
In return we hope that you will respect our artistic license and

take all ratings and warnings under consideration.

G: Pretty tame - anyone can view.
PG: mild language, innuendo.
PG-13: strong language, innuendo, mild violence, sensuality.
M: Everything in "PG-13" plus graphic violence - we're talkin' a la HBO here.
R: Everything in "M" plus sexual situations - aka a Lemon.
In addition to the works in this section,
you can find more from (Kitty)Lynne in the
Guest Author / Co-Authored Works section
and over at Hunk's Corner

A Reason For Giving

One Mother's Day on Arus

A Ray of Hope

~*~
A Reason For Giving
by Lynne
Originally Published 2000 ~ Revised 2016
Rated PG-13
Number of Chapters: 16
Voltron: Defender of the Universe; Lion Voltron; Keith/Allura
As the Christmas season approaches, Allura tries to make things seem more like home for the VF boys. Will there be peace on Arus? 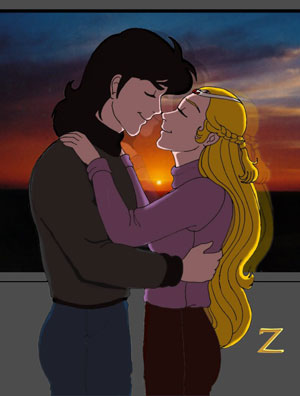 "Rub noses" by Zejan - beautiful Keith and Allura fanart inspired by Lynne's fic "A Reason for Giving"
Visit Zejan's website here:
Zejan's Treehouse
~*~
One Mother's Day on Arus
by Lynne
Originally Published 2000 ~ Revised 2014
Rated G
Number of Chapters: 1
Voltron: Defender of the Universe; Lion Voltron
Hunk helps Princess Allura to understand something about a maternal bond, and does his own mother proud. 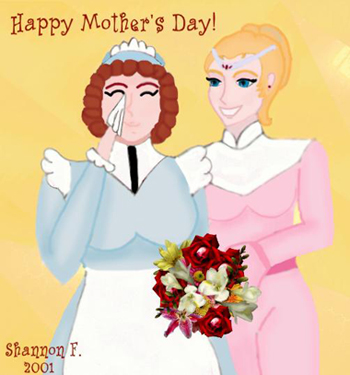 Nanny and Allura by Shannon - Inspired by Lynne's "One Mother's Day on Arus"
~*~
Hangin' Tough
by Lynne
Originally Published 2007 ~ Revised 2014
Rated G
Number of Chapters: 2
Voltron: Defender of the Universe; Lion Voltron
Princess Allura finds herself in distress. Who will come to her aid?

Back to the Top
~*~
Guilty Pleasures
by Lynne
Originally Published 2006 ~ Revised 2014
Rated PG-13 - Suggestive Dialog
Number of Chapters: 1
Voltron: Defender of the Universe; Lion Voltron; Keith/Allura
One member of the Voltron Force has quite the secret...

~*~
Bonds of Love
by Lynne
Originally Published 1999-2001 ~ Revised 2014-2019
* NEW - ADDED CHAPTERS 16 & 17 - 08/2019 *
Incomplete ~ Work in Progress
Rated M - Strong Language, Adult Situations, Adult Themes
Number of Chapters: 18
Voltron: Defender of the Universe; Lion Voltron; Keith/Allura
Bonds forged by blood, honor and tradition are powerful, but bonds forged by love are the strongest of all.
Prologue - Chapter 4     Chapters 5 - 9     Chapters 10 - 14
Chapters 15 - 19
Back to the Top
Fan Works
About the Author
Mini Bio: KittyLynne is the cyber pen name of Lynne, a freelance writer who has been writing fanfiction and publishing online fanfiction since 1998. Though she's written for a variety of series, as of this posting she's limited her online offerings to Voltron, and the anime series Fushigi Yugi and Eyeshield 21. She takes great pleasure in reading and reviewing other fanfictions- she's left almost 2000 reviews on fanfiction.net alone- and is an experienced mentor/editor who is honored to have served as beta for some terrific fanfiction and original story writers over the years.

KL is a graduate of St. Olaf College, a happily married mother of a college student, and a coffee aficionado. She owns three cats, who delight in making her jump through collective hoops for their amusement. An avid reader of all kinds of books, KL will admit that she prefers the romance genre to all others and is a compulsive lurker on the website 'Smart Bitches/Trashy Books'. KL enjoys music, gardening, antiquing and the great outdoors. She has a love for Minnesota Wild hockey that borders on the fanatical, and for all Minnesota pro and college teams in general. She has a special affinity for making lefse and Spätzle, and terribly wonderful puns.

Writing as Maidens of Konan:
https://www.fanfiction.net/u/228083/Maidens-of-Konan

Soul's Radience moderator
https://m.fanfiction.net/forum/Soul-s-Radiance/25119/
Here's what KC has to say...

What can I say about Lynne? She's a wonderful writer and amazing beta-reader. When you read one of her fics you will find a good plot, smooth writing and clever dialog. Lynne can jump from a steamy romantic scene to a funny one or a thoughtful and provoking scene, where you can almost feel what her characters are feeling.

I fell in love with her first Voltron fic, Bonds of Love back in of May 2000 because it had Keith and Allura coming to terms with their feelings and the long, bumpy road in gathering the courage to express them. Entranced, I searched for more of her work and I was pleasantly surprised with fics like Ray of Hope, A Reason for Giving and song spoofs and parodies like Lancey Baby.

Lynne gives the other Voltron characters their place in the sun, giving them romance, laughter and strength. And her Voltron Top Tens are so funny, especially those that become part of ficlets; my favorites are the ones read by Lance and Sven, who give them their special touch.

Then I found out she also writes Fushigi Yugi fics with Mia and Takusi as the main couple and I became an instant fan of the Manga. And she isn't afraid to co-write crossovers, as you can read in the witty fic Pinky, Voltron and the Brain.

Lynne's fics are so beautiful they must be reread several times because I promise you, you will love them as you did the first time.

~ KittyCaro
Here's what KS has to say...

Lynne is such a kind hearted soul, always willing to offer her help, always offering encouragement. Her gracious nature shows in her writing. And she is the best beta-reader I've ever had!!

A talented writer and master story-teller, she pulls you into her tale, and before you know it, you're lost in a world she has created. And I do mean "lost" in the best way possible - more than once, I've started reading something she's written only to find myself so absorbed I've lost all track of time! Now, that takes talent!!

One of the things I deeply admire about Lynne's fanfiction is the way she explores the entire universe. You can tell she has put a great deal of time and consideration into things like the creation of Voltron. The way she takes you back to the beginning is amazing! Her first fanfic ("Bonds of Love") introduces us to the idea that the robot Lions are actually far more sentient than anyone realized! The Lions have their very own spirits - spirits that share this psychic bond with their pilot - and that allows the pilots to share special psychic bonds, too.

It was the first time I ever saw anything like this in a fanfic - or even in the series! You have to remember, "Bonds of Love" predates "Voltron Force" and even "Voltron the Third Dimension." As far as I'm aware, Lynne pioneered the idea that the Robot Lions are tied to a spirit version of themselves - as well as the Lions and pilots sharing a "Bond" (of Love!).

And we haven't even mentioned the characters!! KL has shaped these characters we all know and love into fuller and richer versions of themselves. I wouldn't even know where to start - just be prepared to be impressed.

Reading her fics, IMHO, is much like watching a grown up, (far more interesting!) version of the original Voltron: Defender of the Universe. I really don't know how any fanfic author can do better than that.

~ KittyShan
Back to the Top